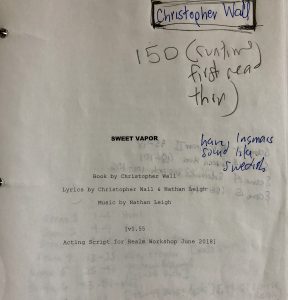 Grateful to the Playwrights Realm for producing a workshop of Sweet Vapor on June 22. The new songs sound fabulous! And I think we figured out how to stage a musical with 32 characters.

Excited to see my new play, The Inherent Sadness of Low-Lying Areas, commissioned by New World Symphony, premiering on February 3, 2018! 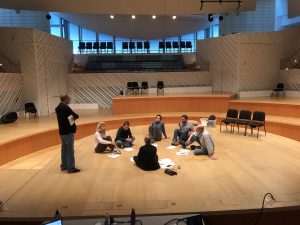 Songs from my musical The God of In-Between, written with composer Howard Fishman, performed at Joe’s Pub, May 2017.

“Finding Faith on the Fung Wah” published in The Saint Ann’s Review, Fall 2016.

Songs from The God of In-Between and The Calamity performed at Joe’s Pub, July 2016.

The God of In-Between workshopped at The Playwrights Realm, January 2016.

Interviewed about my essay “The Size of the Room” on The Leonard Lopate Show, WNYC, June 28, 2007.

Readings at the AWP Conference and at Bookcourt in Brooklyn, covered in Electric Literature.

Residencies at SPACE on Ryder Farm, Vox Theater at Dartmouth, the Norman Mailer Center as a fellow in non-fiction, and the Vermont Studio Center.